What is diet when you will eat on a buffet?

It was not my first time but I have never been to a buffet for so long and I'm not super game on paying $16 or $21 for that matter. The worst thing is, I can't freaking sleep last night because I'm so full and I just woke up and I don't know exactly if I'm gonna hate food right now or I'm craving for something. This is bad. Real bad. maybe buffet are good when having lunch and not dinner

Well, the good thing on buffet was you got everything but daaaang the after effect! Ugggghhh.

Anyway, here are some photos I took from that night. sweet tooth

I was 100% sure to watchTegan and Sara's Manila concert when it was announced and since its just less than a week before the 25th and I still don't have a ticket, I realized that I really need to watch it.

Despite of having some family time for the past week, escaping for the few hours from some person that I would be happy if they will not contact or will not cross path for the whole day. I came to a realization that those wasn't enough. I somehow need to be lost inside a room full of people with positive thoughts and vibes for at least 1-2 hours. With 1-2 hours, my life will be saved once again by music. I may or may not see familiar faces but I know I need this for my self, for my inner persona and I badly need a concert therapy.

The last concert that I've been to was the Paramore show last February and I miss the feeling of being careless for 2 hours or less and just listen to live music.

And with all the retail therapy that I'm doing for the half of 2013 I've also decided that I will not watch The Maine on January (its early to say but I have also some responsibilities that I need to fulfill). Its sad but yeahh welcome to reality.

But I will not miss Avril by February and letting go The Maine show, I think its time for some Patron section for Avril (yeahh. Its time to see her closer than lower box or upper a or than a silver section)
If I really want to be lost for 2 hours, I'll probably go to Zedd's concert here on December though I just want to hear Clarity, Stay the Night and Alive. Haha! But Hayley wouldn't be there (?) .... And it was just time that Stay the Night played on the radio

And Tegan and Sara will be donating to the typhoon victims from the tickets sale so I think its a 2-way thing that I got to enjoy the show and help my fellow country men.

and I just bought my ticket for Monday two hours ago !!!! :D

Anyway, see you around.
Aivrin | xoxo

Stay, you'll leave me in the morning anyway | Now I'm All Messed Up [Tegan and Sara]
Posted by Aivrin ERV at 14:42 No comments:

Have you been upset about the different situation that we encounter in life?

Have you ever secretly realized that some people might not admit it loudly but you found out that they're sick of their current situation? And all they want to do is leave for good?

Have you ever realized that you're more than blessed than the people who are victim of typhoon Yolanda?

Over the years I should get used to "people come and go" but I think I still not used to that. As if I'm protecting some people but eventually they really don't care and then I'll get secretly angry and thank God that I still remember how blessed I am compared to people who don't have food to eat for lunch.

Sometimes, you just have to be thankful for everything instead of ranting about small problems compared to what other people experienced. It maybe look like the world is on your shoulder most of the times but look in the other side, you'll know that you are still blessed.

Starting over is really hard, it was never easy but maybe if you are ready to leave the past behind then I guess you are willing to turn off all emotions and just go for it. That is suicide in a different angle

All of us have different prespective, responsibilities, personality, goals and a lot more differences but sometimes, I just need to accept that we don't share the same passion.

Why do some people become a little bit boastful overnight? Why do people change overnight?

If I saw a long lost friend, I can't say if I'm still the same person they met 5 or 7 years ago because I know my prespective in life changes through the years, though I may or may not look the same through their eyes, and probably I can't tell who was left behind between us.

I never stopped missing some people that I met along the way but I'm also aware right now that probably they don't care what was their past.

Some people I meet might tell me  "been there, done that" and I was like "exactly! You've experienced that but you wasted it now, let me handle this". Never mind.

Why do people waste good?

Why do people leave for good? How can they shut down everything? I don't see them as a strong person but I'm seeing them as a weak one.

Or maybe, some people just care for themselves.

So many thoughts in my hypothalamus right now and I can't even find the right words to type. 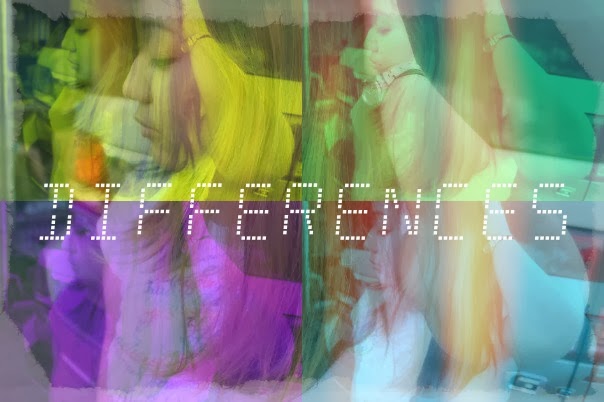 Email ThisBlogThis!Share to TwitterShare to FacebookShare to Pinterest
Labels: personal, rant, too personal

Yes!!! One of my favorite girl just released her self-titled and 5th album. Avril was a huge part of my teenage life and literally everyone knows that I listen to Avril Lavigne and I'm happy that after releasing Let Go in 2002 here she is still doing what she love and I'm so proud of her.

No specific song on which I'm addicted to right now but this new album has been on shuffle on my iPod and computer for almost a week now and I don't know when will I stop. Haha! Just like when Paramore released the album earlier this year, I listen to it straight for almost 2 months! Eargasm at its finest. Lol.

If I will choose a current favorite it will be 'How You Remind Me', I don't know why but yeah I love it. There are these fast songs and catchy, some slow and there are love songs (well if you didn't find the 'love' song then I guess we have a different definition of love song. Haha!). 'Let MeGo' was just released but I'm already excited on what will be her next single and at the same time, I still want to keep this precious album before it hit the ear of everyone around. Hehe.

13 new tracks with my probably favorite line (at the moment) from the song.

2 Here's To Never Growing Up - we don't give a fuck

6. Give You What You Like - I get stars in my eyes

10. Sippin' On Sunshine - hey, what a beautiful day

12. Falling Fast - if seeing is believing, I already know


I really love each track and when I first heard each song I feel there was this connection that we have and I just thought that after all these years there are still connection with me and Avril (that's why I love her) and I thought that she was really speaking for me in some ways.

Love her so much!

And of course, what's next after a new album? TOUR!!!!

The other day my pretty friend Pia, posted on my wall and sent me a direct message on twitter about AVRIL COMING BACK IN MANILA for the 4th time (2005, 2008, 2012 and 2014) ASDFGHjkKLKMNBHD!!!!! And *cough* I never missed her concert here (I'm making history on my concert life. Lol). I never saw it coming though I already tweeted a week ago that she will be in Jakarta next year too so, yeah! I was wondering if Simple Plan will be here too next year because everytime Avril was here there's a possibilities that Simple Plan will be here too! When 2005, Avril was touring with Simple Plan; In 2008, Simple Plan was here August 4th (I skipped that because of school but of course, I can't skipped Avril!) then Avril on September 3rd; and last year Simple Plan was here January while Avril on February. Let's see next year ;)

I'm so excited for this I miss Avril so much and YAY! February 17, 2014, see you here in Manila Avril! I never met her or I've never been on Patron section so let's hope for a different experience on her 4th visit. ;)

Uhmmm. I love watching crime series (NCIS, Criminal Minds, Bones, etc) and since I read the summary of this book I know that it will be an exciting one.

For the record, I didn't read any teaser that Molly posted on her blog because I'm dying to read the whole thing! Good thing the looooong wait is OVER. I've read it already and OMG, I LOVE IT! Without any joke or bluff this is one of my favorite book/story. Its direct to the point, realistic, unpredictable, it will make you nervous, it will make you smile, it will make you cry and most especially, you will never stop flipping the page just to know what happens next. Good thing the ending was bearable unlike some books that you wanted to throw your devices or the book itself because you're so pissed about the ending and you have to wait for months just to fill up the unbearable ending.

I understand that 50 Shades of Grey is good to be on movies but seriously, Molly McAdams book deserve to be on movies too! (But I still believe that imagining/making the story in you head while reading is better than movies) and I imagined that Kash and Mason are Channing Tatum and Jonah Hill (21 Jump Street style. Hahaha!) 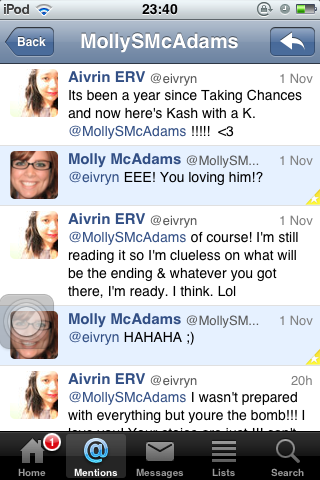 I tweeted this to Molly McAdams when I was on the early chapter of the book. I don't know if I'll hate her somewhere in the middle or at the ending because who knows what will be out there. And I never saw that twist at the end coming! But as I said, its bearable than what happened to Chase. haha 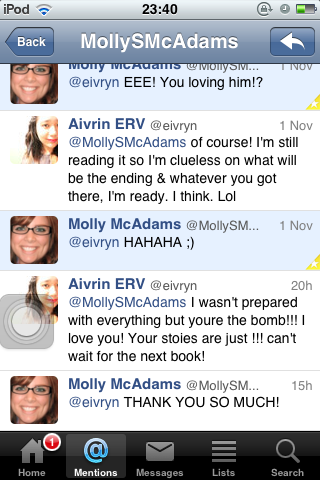 still fan girling when she does reply to me ever since I tweeted her last year regarding Taking Chances. Hehe.

If I'll rate this book I'll give 5 stars. So go pick up a copy and start reading Molly's book!

Molly McAdams,
I love you and thank you for giving us stories that are so awesome. And as I said on my tweet, You're the bomb!!! Please make more stories that are amazingly beautiful. Congratulations on a successful year! Cheers to more books/stories that will make us fall in love. :)

Ps. I'm still waiting for my Brandon or Kash in my life. Hahaha.

xoxo,
Aivrin from the Philippines.